I used to think that Odense sucked as a sailing destination. But I know better now.

I grew up sailing the South Funen waters; navigating green islands, landing on beaches. Not in a million years was I going to moor at Odense Harbour; that long, dull, artifical entrance.

It turns out it is a sport, a game. A different thing, but not a lesser thing. It is curiously difficult to navigate because the channel passage is narrow as a trouser leg, and you will run aground the second you bass that buoy. There is no margin.  You have to beat up to windward in tight little moves. 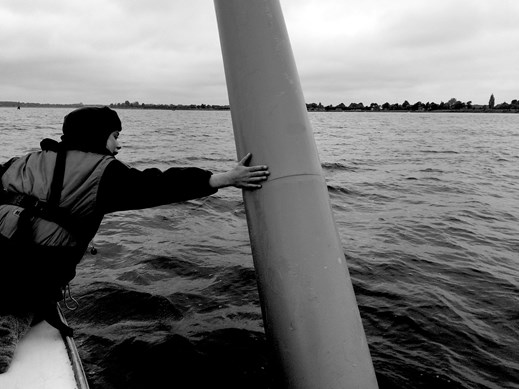 A sport: sailing so close to the buoys that you can stick your chewing gum to them 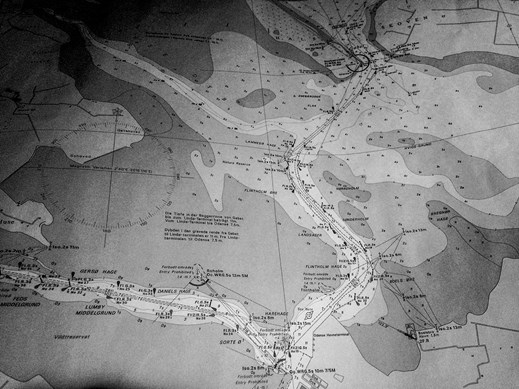 Nautical charts. At the top: Gabet, followed by the channel passage past the shipyard and to the canal. The canal is just outside the frame on the left side.

But before we begin our trip inland, we have to tend to the necessities - sailing, peeing, swimming: 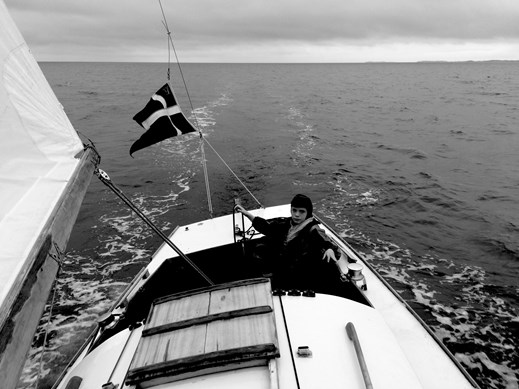 With our backs to Fyns Hoved - the northernmost point of Funen, seperating Kattegat and Storebælt. 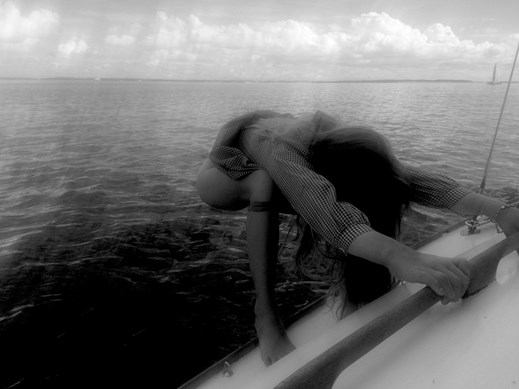 Just south of Fyns Hoved - right when you have passed its tip - you’ll see Korshavn, an amazing natural harbour. And if you don’t want to moor, you can drop your anchor right there in the middle of nowhere: 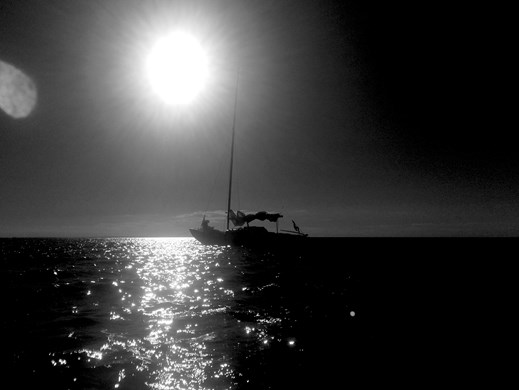 Anchoring for the night 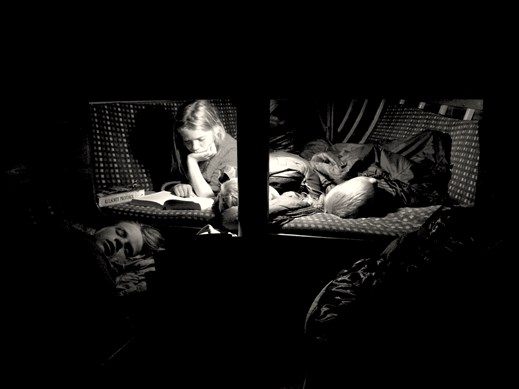 “Hygge” and near-comatose sleep in the bunks below deck 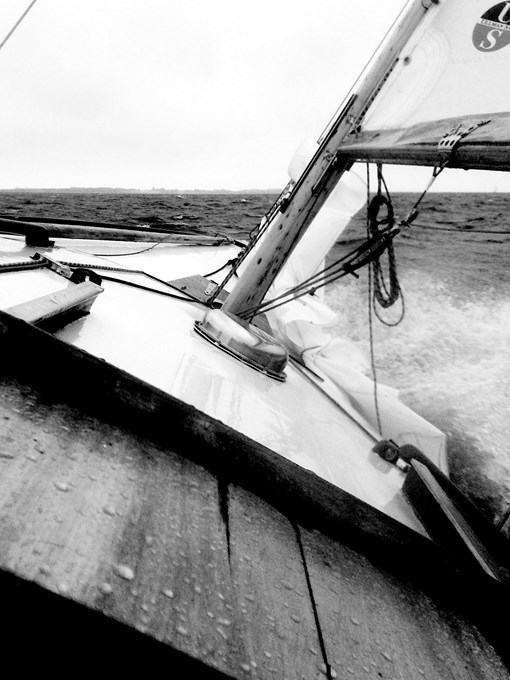 And here we go! Hard winds from the east tear at the sails. The deck is flooded.

Gabet is that tiny opening you pass through from the open sea into Odense Fjord. It is like a funnel through which the wide ocean pours into a narrow tube, and that’s why the waves are always in motion here. Action waters. And if you’re lucky, some of the really big ships are heading towards the shipyard and you get to sail alongside giants. 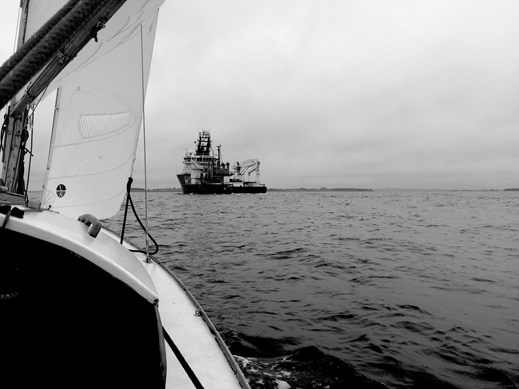 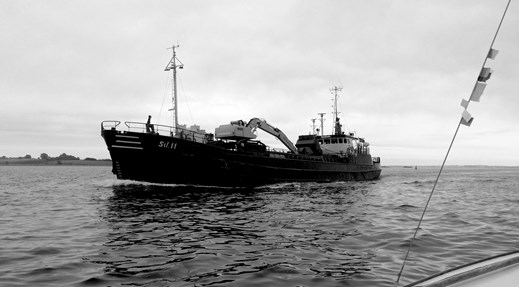 And you’re there: Gabet. On a quiet day like this, the shallow waters are easy and still. Enebærodde at your starboard side. The lighthouse is 14 metres tall and was built in 1869, and its siblings stand on every tip of the Danish coast. I love them. When you turn the corner, the shipyard comes into view.

The shipyard on the horizon

A seasoned sailer who is familiar with the waters would cross the shallow waters at Hvide-Grund, but I am not taking any chances. I am sailing without a gps, using nautical charts instead, and I have only navigated this passage a couple of times. We navigate the buoys and laugh at the cormorants who glare at us before they take off when we get close. 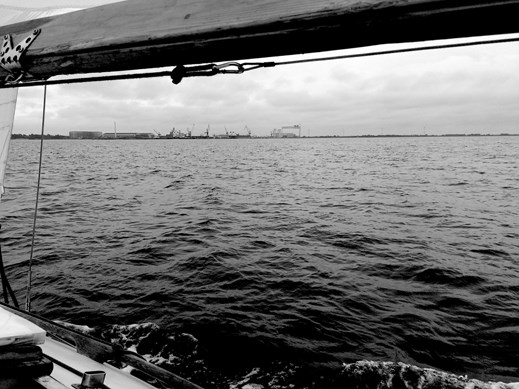 Sailing is slow and suspenseful. You can see far - and it will take exactly as long as you think to get there.

It is quiet here. Only the cranes are noisy. They lift up their metal cargo. We sail by close enough to reach out and touch. 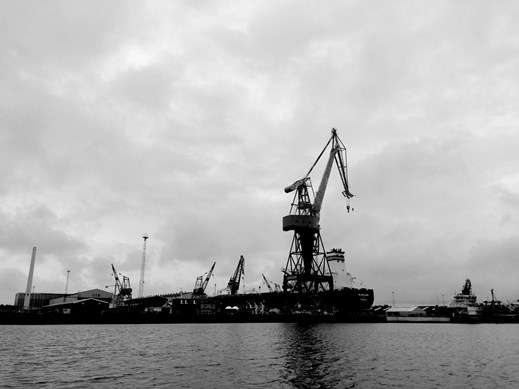 Throughout the 20th century, Lindø shipyard was one of the titans of Funen industry in earnings as well as in number of employees. At the height of its productivity in 1974, Lindø employed 6105 people. The shipyard ruled North Funen. 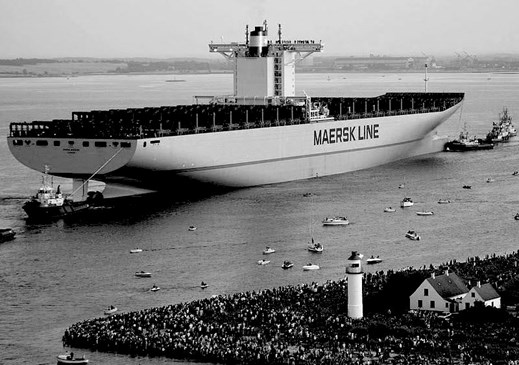 The grand dames of the seven seas were built here at Lindø. Here: Emma Mærsk passes by Enebærodde after stopping by for repairs. In 2006, at her virgin voyage, she was the world’s largest container vessel.

The navigation channel is 11 metres deep here to accomodate the huge vessels. From here on in the canal is 7,5 metres wide and it only gets narrower from here. This is where the chewing gum game starts. 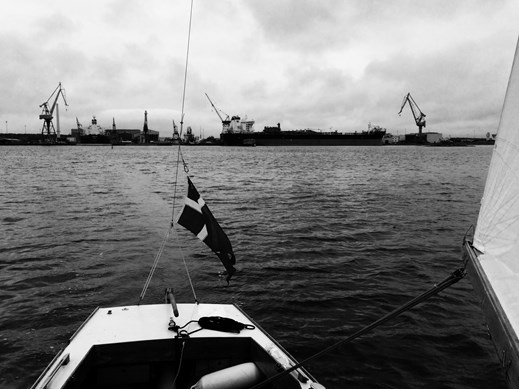 We leave Lindø behind

Taking a nap and missing out

At the next bend in the channel, the smokestacks of the power plant appear in the distance. 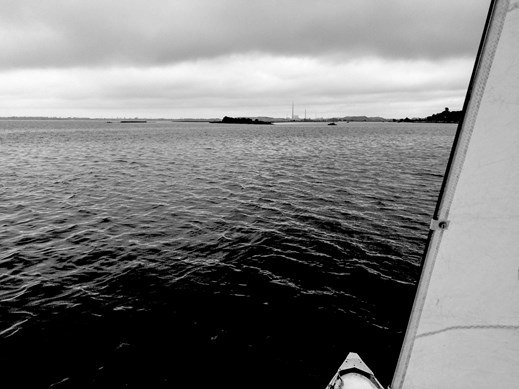 The outermost edges of the nature preserve before Stige Ø is in sight. De yderste klatter af naturreservatet før Stige Ø kommer til syne. Standing at the stern and gazing out is the best.

And we enter the canal. The five kilometre long canal was dug by hand force by 200 workers over the course of eight years, using only shovels and wheelbarrows. On October 7 1803 the first ship entered Odense Harbour through the canal. The new harbour was an important factor in the city’s growth in the 1800s, as it simplified the previous work of unloading goods at Skibhusene, where everything was repackaged  and shipped by smaller prams to Odense. Difficult, arduous work. The canal is around 3 metres deep. 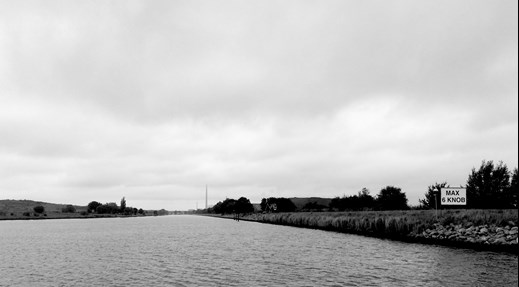 No matter how windy it was on the other side of Gabet, the hills on either side of the passage provide shelter here. You can take off your boots and your hat, and every windproof, woollen item, and the last stretch can be navigated in a bikini, aided by a warm, gentle breeze.

A distinct and meticulous stone wall lines the canal on the last stretch. We spot horses and cyclists on both sides of the water.

As we get close to the harbour, we get busy tying fenders and readying ourselves for mooring, which without the aid of a motor engine involves so much adrenaline and concentrated work that I completely forget to take any pictures of us disembarking. But hell, who needs to be on solid ground?

All pictures by Mira Erik, except the aerial photo of Emma Mærsk.

The Odense of my dead ones

WHEN YOU'VE Lived in a city for a long time, YOU see both what the city was and is

You walk past buildings that once housed the ones you loved.
Places where you lived your prehistoric self.
And you fall into nostalgia. Because the walls and the roads stay there and look like themselves, even though the people who filled the air with perfume and the staircase with footsteps are long gone.

In the Ansgargade apartment, at my refined grandmother's place, there were embroidered slippers in the warm cabinet and marmalade spread on the whitest wheat bread. But now others live there. No longer my grandmother, who always required to taste her watermelon before buying it at Føtex, while I hid behind the tea shelf with blushing cheeks.

I imagine that my grandmother's home - with noise- and dust- absorbing carpets, the Bornholm clock and the black plastic telephone with rotary dial; the dark hallway, the fringed armchairs and the kitchen, where the doors were closed with a small metal hasp making a crisp sound, has now become all whitened and brightened and streamlined.

I don't think THERE'S STILL SOMEONE HERE holding pastel-colored water balls in a glass JAR in the bathroom.

And the bad health of my youngest uncle made the stopover on Ternevej permanent. Here, my grandfather mangaged to skillfully hide his shame of having survived far too much behind a big smile and an abundant appetite.

Where my aunt Anna lived, I don't know. I'm afraid to find out. I'm afraid to concretize the magic out of the memory where lemonade and lavender and my aunt, with hysterical big glasses and long, flowered garments made of crackling artificial materials, live forever.

In 1996, a man whom I see as a mythical character sat himself into a truck and drove over the red light at the cross between Søndre Boulevard and Kløvermosevej, where he hit my father and his silver-gray Toyota, which tumbled like a piece of silver paper against a steadfast light pole. And so life became divided into the one before and the one after.

I remember the laughter. WhiCH was not AT ALL laughing, but A crying that toppled uncontrolled FROM the throat. I remember the awkward sideways GLANCE OF THE POLICEMAN.

I remember him on the hospital bed, with bandages around his beloved forehead and the broken teeth. I remember we were eating food from the takeaway grill-bar in the evening, while watching television. Because we could not cry any more. I can not drive by that intersection without imagining the crash.

They all died in 1996. Grandma on the passenger seat of the silver-gray Toyota Corolla, in a puddle of newly purchased red wine. Aunt Anna with raised legs and no grounding. Grandpa dwindled by the cancer that bit him to the stomach. Rebel enough to live until the last moments as trans-fat-acid-saturated as possible.

When Christmas came, we sat close to each other and watched movies on the couch. A beaten flock, craving for sparkling lights and vaseline on the lens.

we did not cover THE TABLE, AS those we should eat with wERE gone.

The city is rich in stories. Some important for generations. Others only important to me. And I carry them with me. They are part of that lens that gives colour to the city.