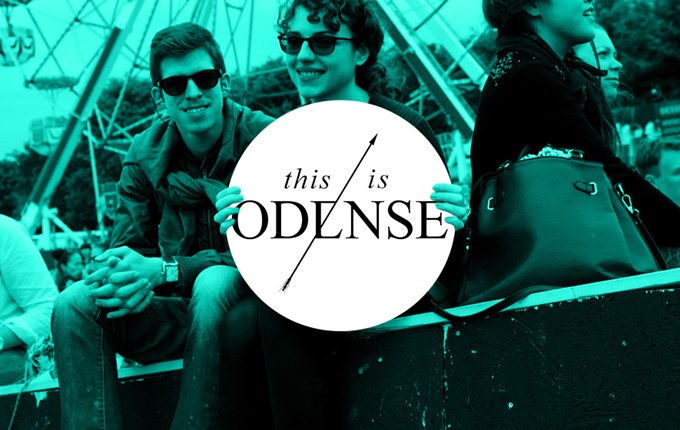 We’re going on a journey. Not a spiritual inner journey, or a journey to an exotic land. We’re going to the outskirts of the town to the concrete campus of University of Southern Denmark on Campusvej 55 where over 20.000 students spend their days. The route from the city center to the friday bar is almost a perfect incision of Odense. For what it’s worth, the journey we’re going on is not one for the story books. It’s just the route I bike every day.

Our journey begins in the Albani quarters just south of the river, where I’ve lived on various addresses since 2009. Long beautiful gravel roads with old workhouses, that have been refurbished in pastel colors, lead up to to Professor Labri, or as it used to be called: The Bunker. It is really hyggeligt. The man in the top hat and cigar in hand that sticks his head out of the bunker has now been child-proofed by covering him in a black soft material and matching bowtie. Quotes from the circus decorate the surrounding enclosure of the playground that young parents pilgrim to on summer weekends. We leave the breathing space of Skt. Knuds gade and continue our journey along Fredensgade. 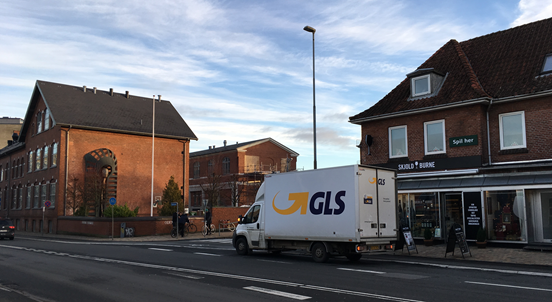 Hjallesevej is heavily trafficked but once you get across you can enjoy the giant artwork on Odense Friskoles wall that I always thought portrayed a sperm, but apparently goes by the name “Bautaport”. This seems fitting as we are leaving the town traffic and go into the jungle of hedges. Skjold Burnes wine store and the next door florist is your last chance of comfort and coziness on your way to pick the kids up from school since the majority of stores towards Ringvejen only sell take away. We pass between the school and wine store and ride alongside kids playing in the protective residential area.

Apart from a allotment and a apartment block there is no disruption of the almost identical houses along our, slightly different, route towards university. Even though the houses are big and robust, the houses look a bit on the cheap side and inhabit mostly conjugal families. The first exception worth mentioning, which also reminds us of our destination is 4. Maj Kollegiet on Østerbæksvej. 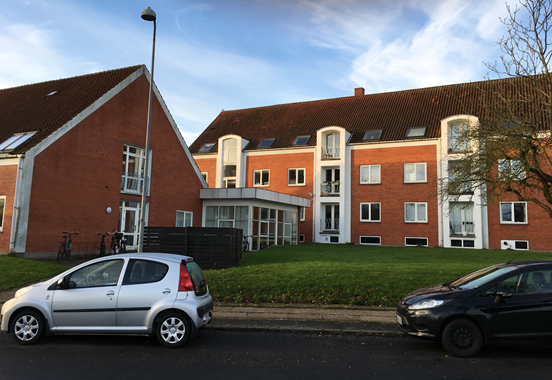 The red brick housing complex reminds me of my grandparents block in Bolbro except behind the walls, you don’t find any childrens rooms nor living rooms. On the contrary, you find a fortress of youth within the suburban idyll. I can remember that I dreamed about moving here, when I began my studies because it was the dormitory closest to the city. Unfortunately, none of my ancestors risked their lives fighting Germans, so I could’ve applied. When I played in the legendary band “Rubber Boat Party”, we used the dormitory bar for rehearsals. Crazy times.

There is still an opportunity for me to stay with the neighbor. The dormitory is namely situated right next to Havebæk Care Center, where the municipality’s white hybrid cars are parked. When the weather allows it, there are often residents in their wheelchairs in front of the center watching passers-by. If I drive by feeling bad in all my functioning and well-being I always get struck by a bad conscience seeing someone who would’ve traded places with me in a heartbeat. Then I pull myself together and take left turn off of Hjortebjergvej, switch up the gear and put some extra pressure into the pedals. 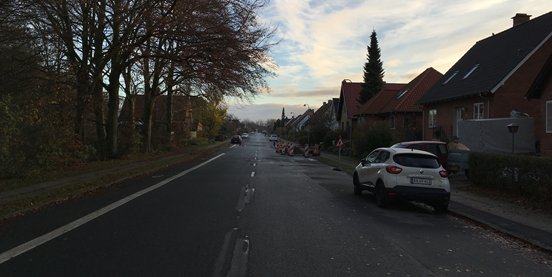 The suburban feeling reaches it’s peak at Hjortebjergvej because of the perfectly rectangular villas. Nevertheless, I really enjoy biking on it. It is like an autobahn for bikes with the broad and even lanes, and not as heavily traficked by cars as Rødegårdsvej and Munkebjergvej. I always find myself biking really fast here - both to and from home. That is probably the main reason for not taking the regular road from the center. Not until we get to the big roundabout at Ejerslykkeskolen, puking our way up the hill with the other riders, we hit the first red light of our route. It used to be hugely important to keep an eye on the traffic light. The “green window” was quite short and you could easily waste a lot of your precious energy by thinking you could make it. You never did. 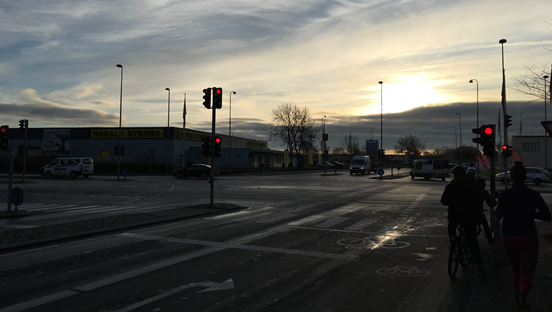 Red on the ring

While we catch our breath at a red light, we realize that the landscape has changed completely. On the opposite side of Ringvejens 4 lanes we see Odenses very own shopping mall. I don’t have much to say about it but I imagine that 90% of Odenses retail trade takes place in this large complex on our left where businesses form a alley of concrete and neon leading up to Rosengårdscenteret.

If it weren’t for all the students in the bike lanes, you wouldn’t know that you were actually on your way to the intellectual core of the city. It might be because of the tower behind the trees at the end of the road reminds me of Lord of The Rings, but we’ll get back to that.

While we travel through the industrial part of the city on the wide bike lane in the fresh morning air, we are suddenly struck by a funky smell of licorice. As we look around to try to find the source, we see a little factory to our left, that produces Oliver Twist’s tobacco bits. It might be the sweet scent of licorice. Or maybe it’s the innocent light blue, retro sign above the factory, or maybe it’s the little neon sign declaring the time and temperature that stirs a feeling of sympathy compared to the block of concrete we are leaving behind us. And their product in particularly wonderful. 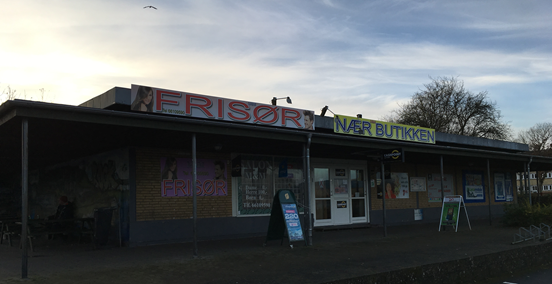 As we cross the road and leave the industrial belt, anarchy suddenly arises. The next couple of hundred meters is the only thing between the university and the railway station. There is no bike lane and the race to the other side stretches across the entire road until first place is established. It is so intense that you don’t realize that right side of the road seems paradoxically frozen in time. The area with yellow house blocks doesn’t seem to have changed significantly in the last 20-30 years. The local shops have clearly been affected by the competition of previously mentioned mall and been reduced to a convenience store with an arcade room, ATM, and the hairdresser “Salon M&M” with the offer “Ladies: 0:-, Gentlemen: 100:-, Children: 0:-”.

We quickly go down the hill to the end of the road, through the trees and onto the bike lane before turning left by the traffic lights at Niels Bohrs Allé. The university is out of sight but from here we can see over the fields and forest in front of the campus where one renewal project after another takes shape. Despite being an impressively large building itself, it is completely overshadowed by the the mythical tower it kneels beside. 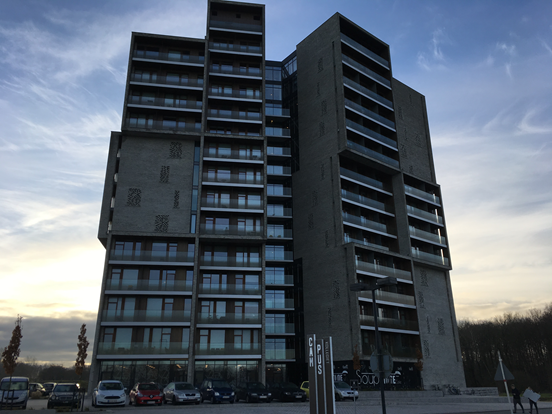 Campuskollegiet is 14 stories tall and if the neon signs of the city resemble the eye of Sauron, then this is Isengard: It shows a huge capacity and and ambition, but I am unsure of for what. It is, considering all circumstances, impressive and replicates the concrete aesthetic that characterizes the rest of the campus.

For most people you can simply roll from here to the university’s main entrance, letting the rust monster devour you. However we bike to the very end of the university. This is, after all, where I work and when we’ve come halfway we can sneak fast the iron sculptures and in through the slightly less fashionable entrance D.